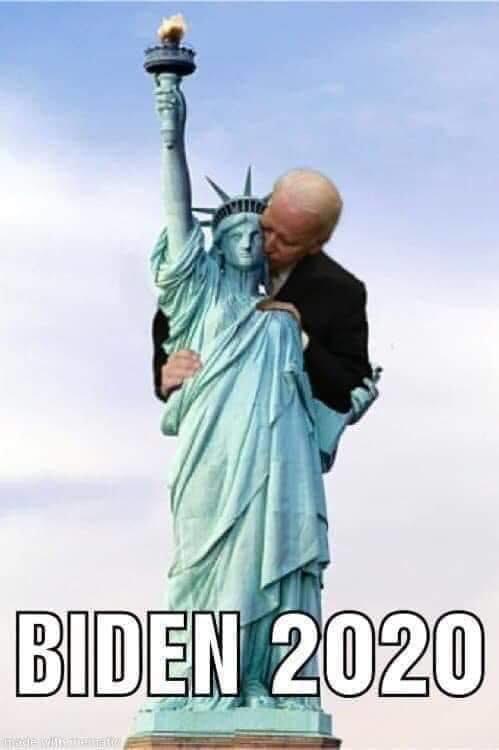 Will You Be Voting For The Creepy, Corrupt “Nice Guy” Or The Patriotic, Pugnacious Promise Keeper?

Joe Biden is continually touted by the Left and its media outlets as the “moral” choice for President of the United States. No matter how often it is repeated, presenting Biden as a “moral” candidate is demonstrably laughable.

For starters, there are numerous videos of Joe Biden sniffing and fondling little girls. The extent of his "unusual fondness for children" has not been revealed but it is certain that any republican exhibiting similar behavior would be mercilessly hounded and soundly condemned.

There is also a credible and well-known video of Biden bragging about using a billion-dollar threat to stop an investigation involving his son. There is strong evidence that Biden's family has been involved in over a billion dollars worth of shady deals with foreign governments, some of which may be treasonous. According to John Solomon, "Joe Biden's outright denial of a financial relationship between his son's company and Baturina flies directly in the face of documentary evidence, which by the way was gathered by federal agencies during the Obama-Biden era." It has also been revealed that Biden was involved in the conspiracy to spy on the Trump campaign, manipulate the Constitutional processes of the United States, and override the voice of the people.

There is also widespread online documentation of Joe Biden’s proclivity for lying, including numerous personal and political deceptions. John Carney summarized Biden’s history of lying this way: "Biden lies unnecessarily, habitually, and without hesitation. When caught lying, he responds with nasty personal attacks….Biden is effectively asking Americans to endorse his deception, to allow him to claim control of a principality of lies." Lying has not traditionally been defined as a “moral” behavior.

With this evidence in view, it becomes obvious that Biden is one of the most morally bankrupt politicians in US history. His only response to all the above has been anger and denial. Despite all this, we are told over and over that we need to elect him because of his moral superiority and presidential temperament. How is such a ruse even plausible? Two reasons:

1. Biden represents an ideologically evil and morally bankrupt party which is willing to tolerate any atrocity in order to gain power.

2. Some voters think they will be satisfied and feel secure with an all-powerful government with Creepy Joe and his ilk at the helm.

Voting for Biden for ethical reasons might require a depth of ignorance or depravity extending into a galactic black hole. Surely the abundance of video evidence of Biden’s abusive behavior and his decades of wrongheaded deception are reason enough to question his moral standing. Hopefully, many are beginning to realize they have been blinded by false ideology and are ready to turn around.

That brings us to Donald Trump. To an honest audience, the immoral proclivities of the Joe and Kamala circus make Trump look like sterling steel. With Trump, what you see is what you get. And what you get is a pugnacious freedom fighter who—despite his foibles—has a robust record of keeping his promises and a list of positive accomplishments as long as your arm.

Consider Madeleine Westerhout's first person account of President Trump after serving as his personal secretary and as Director of Oval Office Operations. She says President Trump is: "Compassionate. Genuine. Relentless in his commitment to improving the lives of the American people. This is the Donald Trump I know....while imperfect [he] is a good man. And more importantly, his agenda is based on sound, proven policies, to make and keep our country safer, stronger, and more prosperous for every American."

The only moral and reasonable option is to reject the false narrative about Biden’s ethical superiority, and vote for the man who fights relentlessly for freedom and does not sniff little girls.