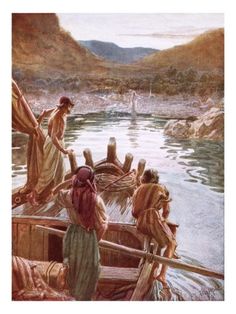 "And it came to pass, that, as the people pressed upon him to hear the word of God, he stood by the lake of Gennesaret, And saw two ships standing by the lake: but the fishermen were gone out of them, and were washing their nets. And he entered into one of the ships, which was Simon’s, and prayed him that he would thrust out a little from the land. And he sat down, and taught the people out of the ship. Now when he had left speaking, he said unto Simon, Launch out into the deep, and let down your nets for a draught. And Simon answering said unto him, Master, we have toiled all the night, and have taken nothing: nevertheless at thy word I will let down the net. And when they had this done, they inclosed a great multitude of fishes: and their net brake. And they beckoned unto their partners, which were in the other ship, that they should come and help them. And they came, and filled both the ships, so that they began to sink. When Simon Peter saw it, he fell down at Jesus’ knees, saying, Depart from me; for I am a sinful man, O Lord. For he was astonished, and all that were with him, at the draught of the fishes which they had taken: And so was also James, and John, the sons of Zebedee, which were partners with Simon. And Jesus said unto Simon, Fear not; from henceforth thou shalt catch men. And when they had brought their ships to land, they forsook all, and followed him." (Luke 5:1-11)

"Now as he walked by the sea of Galilee, he saw Simon and Andrew his brother casting a net into the sea: for they were fishers. And Jesus said unto them, Come ye after me, and I will make you to become fishers of men. And straightway they forsook their nets, and followed him. And when he had gone a little further thence, he saw James the son of Zebedee, and John his brother, who also were in the ship mending their nets. And straightway he called them: and they left their father Zebedee in the ship with the hired servants, and went after him." (Mark 1:16-20)

"Peter and Andrew had a ship, and were partners in the fishing business with Zebedee, James, and John, who also had a ship. Jesus called Peter, Andrew, James, and John to become 'fishers of men.' Apparently, Zebedee maintained the fishing business with hired servants (Mark 1:20). Therefore, it is probable that Simon Peter’s ship was available when needed for the ministry." (Concise Harmony of the Four Gospels, 25)

While I was a bishop in Missouri, a young couple in our ward needed help. They were struggling in several areas of their lives. The husband had a part-time job as a truck driver. They had no children and the wife sometimes traveled with him. The ward helped them get by a few times with funds from fast offerings. We also tried to help them spiritually, and I had a few counseling sessions with them. As they became more active in the church, their overall situation seemed to be improving.

One Sunday, that young husband asked to speak with me privately. We went into my office and sat down. I asked how I could help him. He said that he wanted to thank me for all we had done for him and his wife. He also said that he believed in the church and had very good feelings about it. He wanted to tell me that we would not be seeing them in church much more because he was going to become a professional bass fisherman. Most bass fishing tournaments were held on Sunday, so they would not be very active in the church in the future.

He asked if I understood. I told him that being a professional bass fisherman was a lot like being a professional in any other sport. Very few people who have a desire to make a living in professional sports are able to be successful at it. I asked about his bass fishing background, if he had all the equipment he would need, and if he had a sponsor. He admitted that he had limited amateur experience, little equipment, and no sponsors. I suggested that he might want to consider this decision a little more carefully. He said that his mind was made up and that he was going to take the plunge. Then he asked me if this change would be OK with the Lord and the church.

Rather than giving him my opinion, I offered to read what the Lord had to say about it.

He was surprised. "You mean the Lord has actually said something about this?"

"Indeed he has." I commenced reading about Christ’s appearance after his resurrection.

"After these things Jesus shewed himself again to the disciples at the sea of Tiberias; and on this wise shewed he himself. There were together Simon Peter, and Thomas called Didymus, and Nathanael of Cana in Galilee, and the sons of Zebedee, and two other of his disciples. Simon Peter saith unto them, I go a fishing." (John 21:1-3)

Before his call to follow Jesus, Peter had been a professional fisherman. When Peter said, “I go a fishing,” he was not talking about sport fishing: he was talking about returning to his former life of professional fishing. It appears that at that point, seven additional disciples were interested in joining him in the fishing business.

They said to Peter, "We also go with thee. They went forth, and entered into a ship immediately; and that night they caught nothing. But when the morning was now come, Jesus stood on the shore: but the disciples knew not that it was Jesus. Then Jesus saith unto them, Children, have ye any meat? They answered him, No. And he said unto them, Cast the net on the right side of the ship, and ye shall find. They cast therefore, and now they were not able to draw it for the multitude of fishes. Therefore that disciple whom Jesus loved saith unto Peter, It is the Lord. Now when Simon Peter heard that it was the Lord, he…cast himself into the sea. And the other disciples came in a little ship; (for they were not far from land, but as it were two hundred cubits,) dragging the net with fishes. As soon then as they were come to land, they saw a fire of coals there, and fish laid thereon, and bread. Jesus saith unto them, Bring of the fish which ye have now caught. Simon Peter went up, and drew the net to land full of great fishes…Jesus saith unto them, Come and dine…Jesus then cometh, and taketh bread, and giveth them, and fish likewise." (John 21:3-13)

"This is now the third time that Jesus shewed himself to his disciples, after that he was risen from the dead. So when they had dined, Jesus saith to Simon Peter, Simon, son of Jonas, lovest thou me more than these?" (John 21:15)

Take note that Jesus gave Peter three opportunities to affirm his love. This appears to be a tender mercy giving Peter an opportunity to supersede his previous three denials.

After reading and explaining John’s account to the young man in my office I said, 'You now know what the Lord said about a circumstance similar to yours. Let me ask you a question, ‘Do you love the Lord more than fish?’ He replied that he was shocked to know that the Lord had ever said anything about that topic and said that he would need to think about it. That young couple continued to attend church for about another month and then moved from the area. I have been curious since then about what this young man’s final answer was to the Lord’s question, and about how that answer has

impacted the life of his family.

I firmly believe that each of us needs to ask ourselves the same question, substituting our favorite things in place of the word, fish. “Do I love the Lord more than ________?

* Note: This article includes excerpts from the book, My Life and Lessons.