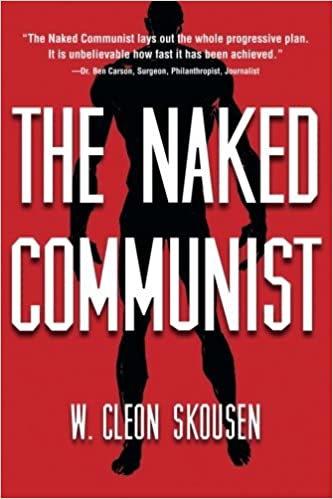 The Naked Communist was published in 1958. The author, Cleon Skousen, was a former FBI agent and constitutional scholar. The book quickly became a global best seller, and was ostensibly utilized by the CIA, FBI, and White House. World leaders sought Skousen's advice concerning the dangers and methods of Communist infiltration and he lectured in every state and in over 60 countries.

Concerning Cleon Skousen and his book, Ronald Reagan said: "No one is better qualified to discuss the threat to this nation from communism. You will be alarmed, you will be informed." More recently, Dr. Ben Carson said, “The Naked Communist lays out the whole progressive plan. It is unbelievable how fast it has been achieved.”

On January 10, 1963, Congressman Albert Herlong entered a list of 45 communist goals (derived from The Naked Communist) into the Congressional Record. Most of those 45 goals have been accomplished. Let's review some of the most disturbing goals and how they relate to current circumstances.

Communist Goal 15:Capture one or both of the political parties in the United States. DONE. Among other things, the democratic party (including Joe Biden) has adopted avowed socialist Bernie Sanders' agenda into its platform. It has also incorporated socialist AOC's plans, including the Green New Deal.

Communist Goal 17:Get control of the schools. Use them as transmission belts for socialism and current Communist propaganda. Soften the curriculum. Get control of teachers’ associations. Put the party line in textbooks. This goal is mostly DONE, as verified here.

Communist Goals 20 and 21:Infiltrate and gain control of the press and media. Mostly DONE. Over 85% of the press leans to the left. Here is a shocking example of typical press propaganda.

Communist Goals 29 and 30: Discredit the Constitution and founding fathers as being inadequate, old-fashioned, out of step with modern needs, [and racist]. DONE.

Communist Goal 31:Belittle all forms of American culture and discourage the teaching of American history. DONE.

Communist Goals 40 and 41: Discredit the family as an institution and emphasize the need to raise children away from the negative influence of parents. In process, as verified in The Invincible Family.

Communist Goal 42:Create the impression that violence and insurrection are legitimate means of solving economic, political, or social problems. DONE, as verified by democratic support of Antifa and Black Lives Matter.

When Skousen first published the list of 45 communist goals, more than 56 years ago, there were some who scoffed saying he was a fanciful alarmist. No one is scoffing now that his list has proven to be accurate and prophetic.

In the preface to The Naked Communist he says: "One of the most fantastic phenomena of modern times has been the unbelievable success of the Communist conspiracy to enslave mankind. Part of this has been the result of two species of ignorance—ignorance concerning the constitutional requirements needed to perpetuate freedom, and secondly, ignorance concerning the history, philosophy and strategy of World Communism."

Most of us are repulsed by such blatant evil and are much more inclined to agree with the following: "We believe in a moral code. Communism denies innate right or wrong. As W. Cleon Skousen has said in his timely book, The Naked Communist: The Communist ‘has convinced himself that nothing is evil which answers the call of expediency.’ This is a most damnable doctrine. People who truly accept such a philosophy have neither conscience nor honor. Force, trickery, lies, broken promises are wholly justified.” (Ezra Taft Benson, Secretary of Agriculture under President Dwight D. Eisenhower)

In his June 2020 article, The Naked Communist – Sixty years Later" William Haupt III observed that Skousen was the first to define, "how people in capitalist nations are persuaded to choose communism or socialism at the expense of their liberty and freedom." He also asserted, "The rise of socialism within the Democratic Party today [validates] Cleon Skousen’s warnings 60 years ago. He told us this will happen in America if we fall asleep at the wheel as guardians of our democracy."