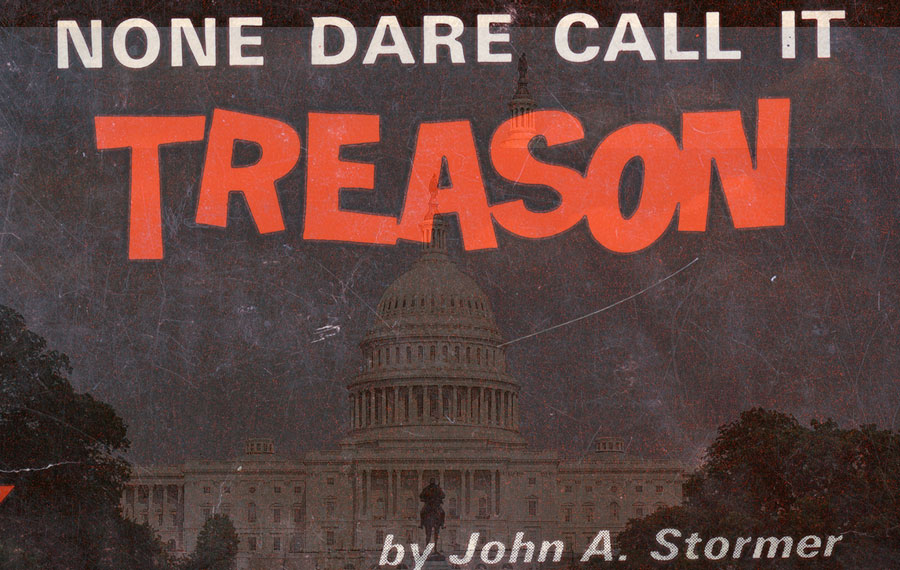 None Dare Call It Treason

In 1964, John A. Stormer wrote and published the book None Dare Call It Treason. Stormer was a dedicated soul who spent more than four years researching and writing the book which included over 800 references to credible sources. It is said to have become the most successful self-published political book ever, selling about seven million copies.

Before proceeding, it is important to clarify that, contrary to modern propaganda, communism and socialism are two sides of the same coin; they have been called different shades of black, and indeed they are. Lenin himself said “The goal of socialism is communism.” Socialism is often seen as a kinder, gentler system than communism, and yet they both lead to the same dismal, destructive, deadly end.

Stormer warned that the philosophy of communism—whether or not it is rooted in a particular nation such as the Soviet Union—represents a great threat to Americans and to the freedoms they hold dear. Stormer explained decades ago what we are now seeing play out all around us: “[Communists] have infiltrated every conceivable sphere of activity: youth groups; radio, television, and motion picture industries; church, school, educational and cultural groups; the press; national minority groups and civil and political units…We cannot defeat Communism...with appeasement or accommodation…a ‘soft’ attitude toward Communism can destroy us.”

Here are some quotes from None Dare Call It Treason exposing the true nature of the socialist-communist agenda and the chilling inroads it had made in America, even in 1964:

● Communism is a disease of the intellect. It promises universal brotherhood, peace and prosperity to lure humanitarians and idealists into participating in a conspiracy which gains power through deceit and deception and stays in power with brute force. Communism promises Utopia. It has delivered mass starvation, poverty, and police state terror to its own people and promoted world-wide strife and hatred by pitting race against race, class against class, and religion against religion. (Page 16)

● The communists, therefore, are not interested in converting You, the reader, to communism, particularly if you are over 30 years of age. If you can be lulled into doing nothing to oppose the triumph of world communism, that is enough. Once the takeover comes, you, like millions of others, who believe in God and man’s responsibility for his own life and actions, can be slaughtered like diseased animals or worked to death in slave labor camps or brothels for the Red Army. The communists are after your children or grandchildren who can still be molded into obedient slaves of the State. (Page 20)

● The communists are extremely close to total victory. But it is not inevitable. Their one fear is that Americans will awake in time to the danger and do something about it. That is our hope and our challenge. (Page 229)

John Stormer was so concerned about communism taking over America that he updated his book in 1990. The newer version was called None Dare Call It Treason…25 Years Later and it included 13 new chapters, some of which were titled, "Why Do Our Leaders Betray Us?", "How Communists Manipulate Society," "Communist Influence in America," and "The Communist Plan: Conquest Without War."

In 2014 Jack McLain published a review titled None Dare Call It Treason – 50 Years Later – The Vision of John A. Stormer. McLain warned, "Now some 50 years later, it would seem that many Americans still have much to learn. Most of the ten planks of communism have been fulfilled in our nation. Socialism, kin to communism, has taken root and….Americans seemingly know little about how they have been indoctrinated, much less as to what to do to turn our nation back to sanity, wisdom, righteousness, and the freedoms that we once knew."

In September of 2018 professor William Kilpatrick published an article titled "None Dare Call It Treason." In that article he argued that there were "far more traitors on American soil today than ever before in history." He went on to say, "In the United States, the traitor class is well-educated, well-paid, and highly influential. They work in the media, universities, big business, politics, entertainment, and even churches." The true threat here is not that actual Soviet spies or undercover Chinese communists have planted themselves in these myriad places, although that is possible. The real threat is that the socialist, equalist, communist ideology has nestled itself within the minds of influential Americans themselves.

The Dictionary.com definition says the meaning of treason includes, "the offense of overthrowing one's government," and "the betrayal of a trust or confidence; breach of faith; treachery." What acts do we see being committed all around us that fit this definition? They are popping up everywhere, in bolder and brasher fashion, with very little opposition. It appears Stormer, McLain, and Kilpatrick were all too correct in their appraisal of the socialist infiltration of the United States of America and the way it would rot us from the inside out.

In 2020 we need to make some momentous decisions that require serious consideration, so let's review some pertinent historical facts.

● In the revolutionary war (1775-1783) we fought and died to throw off tyranny and establish a republic which protected freedom, property, and pursuit of happiness.

● From 1946 to 1991 we were party to a world-wide Cold War against communism due to the staggering fact that communism had enslaved billions and caused the death of over 100 million people. Untold thousands of Americans have died fighting communist attempts to dominate the world.

● For many decades Cultural Marxists have attempted the "long march through the institutions" to take over America.

Now we are on the verge of the most irrational calamity in history, at risk of voting away everything Americans have continually worked, fought, and died for. We have read about The Greatest Generation saving us from tyranny. Is it possible that we have become The Gullible Generation? Surely, we are not naïve, uninformed, and foolish enough to trade away our property, prosperity, and freedom for the false promises of Counterfeit Justice cloaked in socialist wrapping paper.

John Stormer saw this coming. He knew that the constitution of the United States of America protected private life and property and that collectivism was treason. He knew that our American Republic and communism were locked in a life and death struggle. He warned us that many were being tricked into being traitors. His greatest fears are being acted out right before our eyes.

Not many Americans are deliberate traitors, but far too many have been bamboozled. It is time to start seeing treason for what it is, calling it by its name, and rooting it out of ourselves and our countrymen whenever and wherever it rears its hideous, socialist head. For those who are not truly in their heart of hearts intentional traitors but have been hoodwinked by socialism’s heady but hollow promises, it's time to come to the light. It is not too late. Those who turn around now can help save America from fomenting its own demise.

Donald Trump is a patriot fighting to save our free and prosperous republic. On the other hand, most Joe Biden voters want to fundamentally change and irreparably communize America, but none dare call it treason.